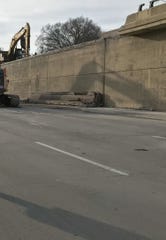 Portions of a concrete cap from a retaining wall along the southbound John C. Lodge Freeway that collapsed late Friday, injuring a contract worker, were already set to come down this weekend, an MDOT spokeswoman said Saturday.

The retaining wall itself did not collapse, MDOT spokeswoman Diane Cross said. The concrete cap at the top of the wall was set to be removed this weekend, once the road had been completely closed off at 9 p.m. Friday. But it fell earlier in the evening, she said.

The southbound Lodge from 8 Mile Road to West McNichols Road is expected to be closed until  5 a.m. Monday for the repair work.

Cross said the cap was being sawed off by contractors, but it is undetermined how and why the 200-foot portion of it fell.

About 300 feet of the cap was set to be removed to release some pressure from the more than 60-year-old retaining wall as a precautionary measure, Cross said.

The concrete fell from the top of the wall down on to the shoulder of the freeway, but not into the road.

“We did not plan on it coming down early or somebody being hurt, but that 300 feet of concrete cap was coming off this weekend,” Cross said.

The section of the freeway will be reopened by Monday and drivers have nothing to worry about with the retaining walls, Cross said.

Meredith Spelbring is a news intern with the Detroit Free Press. Reach her at mspelbring@freepress.com or on Twitter @mere0415.