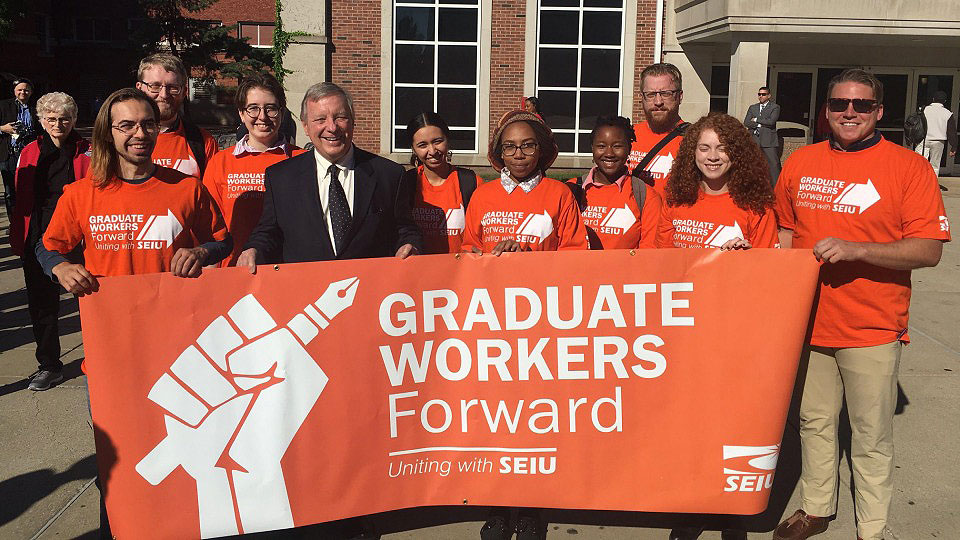 NORMAL, Ill.—In October 2018, Illinois State University’s more than 400 graduate workers voted to officially unionize and be represented as SEIU Local 73. The long months of meetings, difficult one-on-one conversations, procedural documents, and learning the process of organizing a workplace paid off for the graduate workers involved.

All unionizing efforts are difficult, and the reasons are numerous—from the pervasive thought that unions are “no longer needed” or individual workers thinking they don’t have it that bad to the fear that a boss will outright fire you if you vote to unionize, despite it being technically illegal to do so. Organizing graduate workers and students comes with additional challenges due to frequent turnover; the workers typically graduate and leave for another job after a few years, bringing in new graduate workers and students. While graduating and getting an education is the primary goal, though, no worker, or student, should have to live on scraps during their time at university.

Winning a union was tough enough for the graduate student workers at ISU but negotiating a contract has been even harder. The union was unable to meet with the university for nearly a year, citing obtuse and unaccommodating meeting dates from the university. One could imagine how many union members and organizers were lost to graduation in that one year alone.

Their first negotiation meeting was finally held in October 2019, and since then the Graduate Worker Union has met with the university no less than 22 times. The union has set out with initial demands for non-discrimination clauses in university policy on the basis of citizenship or immigration status; benefits for parking, childcare, and healthcare, including dental and vision; an increase in their stipend (pay); and the removal of student fees.

Graduate workers currently receive a minimum of $9,000 a year as their stipend, with Ph.D. candidates receiving slightly more than Masters students. But all of them have thousands of dollars of student fees deducted from their paychecks, averaging $300 a month.

To put that into perspective, a comprehensive housing market analysis by the U.S. Department of Housing and Urban Development found rents for student apartments are typically charged by the bedroom, which averaged $640 a month during the winter of 2016. Even if a graduate worker was to find a living situation with roommates, total rent could be as high as $1,200-$2,000 for two to four people sharing an “average” apartment.

Renting outside of the “university square,” the area within Willow St., Vernon Ave., Linden St., and Main St., is hardly cheaper. Compounding this issue, Illinois State hardly has enough university-sponsored housing for half of their undergraduate population, handing off students to property management companies and private landlords. This is all before factoring in travel-related costs, food, bills, and utilities. The university hardly pays these workers enough to live.

Graduate workers, working 20 hours a week and expected to perform additional research labor even if they are not taking classes, are still forced to pay student fees. Current full-time employees at the university do not have to do so when they are also taking classes. Full-time university employees receive what is referred to as a “soft benefit” that allows them to take up to eight free credit hours a semester, at any level, without the associated student fees.

Graduate workers also come into universities at varying parts of their life and often create a more diverse population than undergraduate populations. Undergrads are typically between the ages of 18 and 24, can be classified as dependents and often get help from family, or can rely on the financial aid specifically tailored to undergrads and their parents’ economic situation.

Graduate workers, however, come from a far broader and older demographic. They may have children of their own and are often unable to be considered a dependent of anyone else. Many have given up jobs to go to school full time in the hopes of future career advancement, but that means they’ve often lost their primary care insurance as well. Usually, they have additional bills to pay for themselves and others, and are generally further along in their lives—and thus, financial obligations.

It can be expensive to be poor. This is what the Graduate Union hopes to alleviate by asking for childcare stipends, a reduction or elimination of things like parking fees, and full health care coverage, including dental and vision, rather than the current rebate system.

Recently, as talks with the university have not resulted in much progress, the union has expanded its options and remained flexible. While the workers are willing to negotiate on most matters, the university has not budged. It’s still offering the same $9,000 stipend, says all student fees will remain mandatory, plans no changes to health insurance arrangement, and is making no offer of childcare, parking fee reductions, or immigrant protections. After a year and a half of negotiations, it appears Illinois State wishes to stall the graduate workers, hoping the constant turnover in the student-employee population will break the union. Meanwhile, the president of the university recently received a $46,000 bonus.

Some actions by the university aimed at forcing a contract have been outright illegal. Illinois State wanted to include a no-strike or no-lockout clause in the contract. A no-strike clause is required by law, however, according to both union members and their representative, the university’s proposed language ensuring that a worker who takes part in any strike or work stoppage, legal or not, could be punished.

In verbal confirmation to union negotiators, the university admitted this clause could go as far as punishing union members who even share sympathies or solidarity with other labor disputes on social media. The proposed clause would waive away workers’ rights and be in violation of federal law. An unfair labor practice claim has already been prepared for filing with the Illinois Labor Relations Board if the university refuses to remove it. The university claimed it was standard practice.

The Director of Labor Relations and lead negotiator for the university, Mike Kruger, is also refusing to codify discrimination protections on the basis of citizenship or immigration status. According to union members and representatives, he stated that protecting international workers would be like trying to protect child molesters. One international graduate worker was also deported for their support for the union, according to union members.

In their recent Jan. 28 meeting, the union brought in a federal mediator to help with the impasse. That day, before, the meetings had started, the university’s President’s Office abused their access to the university’s communications network when it forwarded a message, in addition to developing its own dedicated webpage, to all of campus on current university negotiations under the guise of transparency. This is a typical union busting technique used to sway other workers and stakeholders to the side of management.

According to the Graduate Workers Union, even with federal mediation, the university has refused to budge on any issue. This was not a good faith effort; the university was forced into mediation by the union. The Grad Workers requested mediation through Federal Mediation and Conciliation Services on three separate occasions after negotiations further stalled, all declined by Illinois State. 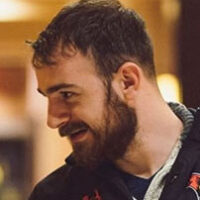