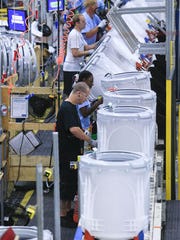 LOUISVILLE, Ky. — GE Appliances union workers will vote this afternoon on a proposed four-year labor contract that boosts entry level wages to $15.50 an hour and provides slight pay increases for hourly workers across the board.

GE Appliances and IUE-CWA Local 83761, which represents more than 3,800 employees at the south Louisville manufacturing complex, reached a tentative agreement earlier this month, but the deal must be ratified by a majority of workers.

Whether it will pass is a big question.

Dean “Dino” Driskell, president of IUE-CWA Local 83-761, could not be reached for comment.

“The new contract has enhancements in pay and benefits for employees, as well as provides additional flexibility for employees to balance work and personal life,” GEA spokeswoman Julie Wood said in a statement.

According to a summary obtained by The Courier Journal, new hires would receive a boost of $1.50 an hour added to the current rate of $14 an hour. On the upper end of the pay scale, veteran production workers ages 60 and older with more than 15 years would get an additional $7,000 in salary over two years.

Health and retirement benefits have been a big focus for workers. The proposal calls for no increases in employee payroll contributions for health insurance for two years, in 2021 and 2022.

Union leaders explained in the multi-page document that the terms are for the first two years, with a “reopener” on wages and benefits for the second half of the contract, after they can get a better sense of what’s happening with health insurance costs.

“We did not want to negotiate wages that would be outpaced by the rising cost of health care. This will enable us to have a clearer picture of where these costs will be and negotiate wages to reflect the increases,” the summary said.

The tentative agreement would provide wage increases totaling an average of $7,000 over the coming two years for employees hired since 2005. Production employees hired between June 2009 and the end of December 2016 would receive 70 cents an hour this month and an additional 50 cents an hour starting next June.

Production and maintenance workers hired before October 2005 would receive a 50-cent-per-hour raise this month, plus a $1,000 cash payment in June. Night-shift bonuses will increase to $1 per hour for new employees, those hired after February 2017, compared with the current 50-cent-an-hour rate.

A voluntary separation package also is being offered to up to 50 employees. Those eligible are age 60 or older who were hired at Appliance Park before October 2005 in production or before June 2009 in skilled trades jobs.

Other changes: Vacation time for mid-career employees would increase so that an employee with 10 years of service would receive 3.5 weeks of vacation, instead of waiting 15 years. Personal days also have been enhanced, with new employees with six months to a year of service accruing 16 hours, or two days.

A worker with 10 to 19 years would receive four days, and those with 20 or more years, five days, which represents an additional personal day for each category of employee compared with the previous contract.

Many union members nationwide have resisted lump-sum payment offers in collective bargaining, arguing that approach doesn’t guarantee higher wages in the future. Appliance Park’s union leaders said in their note that going into bargaining, “our goal was to close the gap in the tier (wage) system, while getting general wage increase for all.”

Like other companies, GE Appliances intends to recognize Juneteenth, or June 19, as a paid holiday starting next year. The day commemorates the end of slavery in the U.S., and it will replace Election Day as one of 12 holidays for production employees, the summary said.

This story may be updated. A worker at GE Appliance Park in Louisville works the assembly line. The union is set to vote on a new contract. (Photo: Courier-Journal file photo)

California Prop. 22 explained: Voters to decide if Uber, Lyft, Doordash drivers should be classified as employees or contractors