Most of us work for some form of paycheck, even the self-employed. Few subsist on their own efforts. Even retirees, politicians, and welfare recipients live off someone’s labor, if not their own.

Savings, if you have any, are the result of past labor. That makes a job shortage problematic for everyone, not just the jobless.

The June US employment report showed some welcome improvement. Businesses brought back many workers as parts of the country reopened. That’s great but it was only a start. We need several more months like that, and it’s not at all clear they are coming.

To be fair, there isn’t a lot of clarity when we look back at past data, either.

One little-noticed effect of COVID-19 is the havoc it wrought on our employment data. Government statistics have always had their quirks, and often measure the wrong things, but the bureaucracy is at least consistent. It collects the same numbers, the same way, over and over again.

When is someone unemployed, exactly? Suddenly we have workers who are/were:

Historically, the Bureau of Labor Statistics considered someone “unemployed” if they were able to work and seeking work, but not currently working. Yet now millions can work, but aren’t looking, because they expect to be called back but may not be. How do we classify them?

There’s a vast difference between the numbers filing unemployment benefit claims vs. the surveys BLS conducts for the monthly employment report. Those benefit claims are also questionable, since state agencies were inundated with claims they couldn’t process.

Then there is the question of how extra benefits have affected people’s willingness to work. If you can make more money staying home than by working, staying home is perfectly rational. But will you admit that in a government survey?

Clearly, many businesses are closed and many workers jobless. Some will go back, but some jobs will be permanently lost. That’s true in any recession.

The difference now is that this one happened very suddenly, with a depth and severity unseen in 90 years, accompanied by a swift and generous fiscal response.

Many people (though far from all) were made comfortable. They thought their jobs were safe and expected to go back.

That means we haven’t had the kind of pain signals a situation of this magnitude would normally generate.

Those signals may be coming, though. Here’s a chart comparing this year’s percentage job losses with prior recessions. 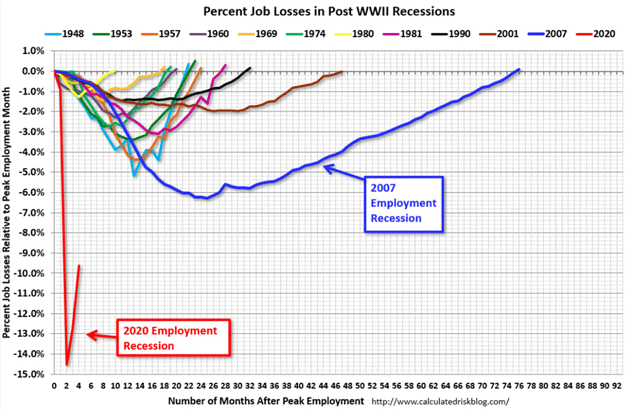 That bright red waterfall is where we are right now. It appears to have hit bottom and splashed a bit, but there’s a lot of white water ahead. You can see in the 2007 line how long it took employment to recover after the last recession.

At that pace, all the jobs will be back sometime in 2026. (Not a typo.) To assume the “V” seen above will continue in the same direction means thinking there will be a quick return to normalcy.

Maybe this time is different, since at least some of the layoffs were temporary. The BLS data tries to distinguish between temporary and permanent job losses.

That’s a moving target, though, because employers don’t always know. They furlough people with the intent of bringing them back, but then find conditions don’t allow it. At some point, temporary job losses can turn into permanent ones.

Even when jobs reappear, we still don’t have a good idea of how many furloughed and unemployed workers want to go back, or are even able to.

Take a look at this chart from Philippa Dunne: 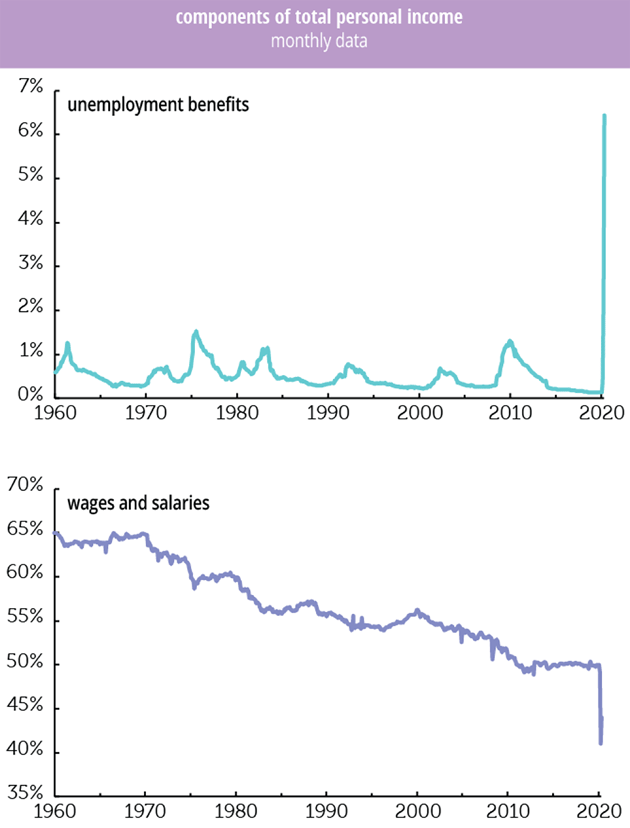 Unemployment benefits are skyrocketing as a percentage of personal income while wages and salaries are dropping hard.

We will get some more insight this month because Congress will extend, modify, or expire the enhanced unemployment benefits.

One thing we know for sure: An economy with double-digit-percentage unemployment isn’t going to have a V-shaped recovery. It just can’t.

There is every reason to think it will get worse before getting better. And it will get better… but probably not soon.

Disclosure: I/we have no positions in any stocks mentioned, and no plans to initiate any positions within the next 72 hours. I wrote this article myself, and it expresses my own opinions. I am not receiving compensation for it. I have no business relationship with any company whose stock is mentioned in this article.